Week and a half

So this is probably going to be a big post to catch up with what’s been happening.

My radio buddy and hopefully future business partner Jelmer came over the other week and went back on Wednesday. We had loads of fun doing creative things, we wrote things but mine was time sensitive, however some if it is still relevent. I’m goin to record it tomorrow along with the other stuff i need to do. Weve got loads of cool plans ahead.

But yeah it was nice to actually see him and go tonplaces with him, he’s a right laugh. We also met with Robin and Dan for a cheeky nandos and  then for a quick pint or two. We know where we want to go with Sound Gorillas now, it’s just a matter of getting on with it.

We went to Oxstalls campus to talk to someone about our ideas. It was weird to see what had changrd, but also what was the same. Its strange that the place we did our live broadcast OB was almost the same.

On Friday my future life partner/Fiance Aphre, along with Finn, and her parents and I all went to a place called Croyde, which is a place in Devon. If you look on the map where Plymouth is and go up in a straight line. There’s a beach there and everything.

After a shakey first day that I wont go into, the whole thing was pretty cool. I got to know the future in-laws a bit better and have a laugh with them, so much fun with Aphre and Finn. We went to the beach where Finn had loads of fun marching into the sea and dodging the Jellyfish on Saturday. 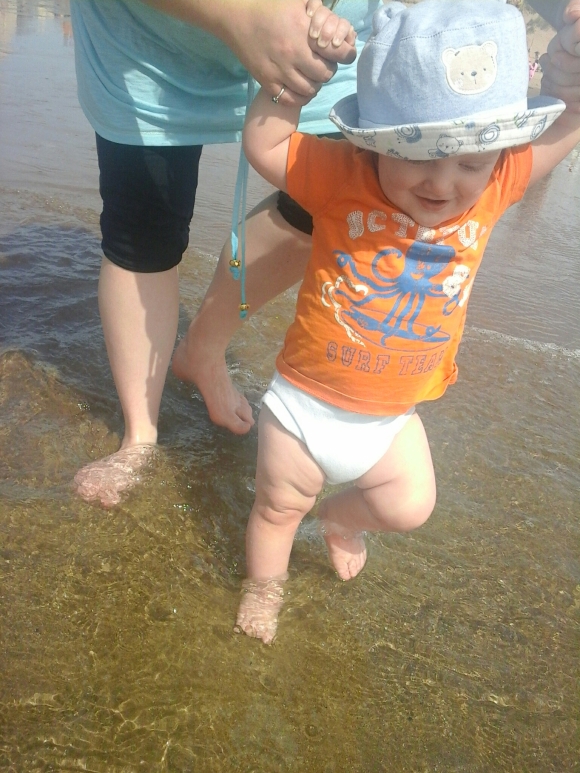 We also went for a Swim in the pool on the Sunday which again Finn loved sooo much. The pool had a current that went round in a circle which was really fun, and after we went to Ilfracombe to explore the place. We had dinner at the wetherspoons pub which was really cool, the upstairs was an outside with fake grass… FAKE GRASS!

It was a nice view too. The downside was the seagulls flying past. A few times they flew low to ither people and at one time this idiot couple who were giving us looks because Finn was making noise a little bit left, and left half their food. The seagulls hovered down onto it and another guy chased them away which looked quite funny.

This morning we left, and we had some final fun in the soft play area.

Aaanyway theres a load of other fun stuff that happened, stuff that I will probably talk about at some point, but not really coming to mind right now.

So I’m applying for jobs today and tomorrow. Some radio, some media and a couple for just jobs. Pretty straight forward really.

Today I’ve been on a bit of a “whatever” feeling and taking things as they come with little enthusiasm. I had to tidy the whole flat today for a viewing that never happened.

Jelmer is down this weekend, which will be fun. Lots of rado chatter and theories will be discussed.

So it’s been about a week since the last post and things seem to generally be back to normal. I think there is a general lingering weirdness but it’s not getting too much in the way, it only seems to be a thing when I’m worrying, like where the hell I’m going career wise. Now Johnny, calm down before a rant comes into play.

So things have calmed down though, and I’ve had time to rest and think, over think, re-over think and re-over thunk re-over thinking and came to the conclusion that thinking is so overrated and maybe we should just do things without thinking. Although I think some people may not enjoy that because they need plans and not thinking about them plans and just doing something is not a thing they can do. I don’t know where I’m going with this but you’re here now and we have to find a way out of this, so heres the next bit of the blog.

I’ve been going through bits of my personal archive also, including putting some old rewind the hits on the website and the old prick up your ears show so if you want to find out where it all began feel free to check that out. When they are dont I’m gojng tomout up all the other shows I have. Theres so many things. I feel bad about old content that’s not as good back then that I’d produce differently now.

Anyway it’s 1:02 now so i guess I should sleep as Finn will wake about 8ish. Just had a random thought about the outside noises. You know how it sounds sometimes when you hear a noise and wonder what the hell it is. Like some distant screeching noise or metal clank.

So the recovery seems to be taking linger than it should I think. I seem to be clunking out of energy by about 9 o’clock only to splutter completely out by 10… and that’s with a nap in the day and i don’t do naps.

I suppose it’s not a terrible time really, but normally id be ok til 1. Also there is no enthusiasm for food and having up and down mood wise so I need to pull myself together and get out of this weirdness. Plus with other things the last few days seeming to get to me i don’t think that is helping.

Other than that, I’ve stated doing other normal everyday things. Maybe its to do with that I ramped up from doing loads in the run up and after it was done straight into making sure my day is clear with nothing to do, then feeling weird that I’m not doing something. Although I’ve made attempts to look for work again. Theres not much radio that’s relevant recently. I’m going to see if theres any commercial stations here and there I can do some little bits for.

I’ve been feeding my love for radio today though listening to air checks from the past. It’s really weird to be able to listen to how Kiss 105 Yorkshire sounded, and Kenny Everett on Radio 2. Things like that remind why I want to get into radio.

Today the feeling I had from yesterday was still there but not as bad, however it’s like I hit a backwards wall today. The whole energy just shot away in the afternoon and evening. I’m in bed struggling to be awake writing this.

This is worse than hangovers, at least you can spew up and sleep it off in a day. This feels like it will need extensive time to get back to normal, everything feels wrong. I did manage to do normal things today like update the website and do a little work, but I think that’s where I went wrong. I should have just rested. It was happening in waves, i was ok, then i wasnt, then I was. Concentration was there one minute and gone the next. I was trying to explain it to Jelmer, which never works. At least I know I just need sleep. I think tomorrow I’ll just sleep when Finn does.

Yesterday i thought I just needed to shake off the feelin I had and today would be ok, but it’s like whatever wasnt there yesterday came today. So today has been work, look at planns for Television centre, then Code Red script, then doss around online.

In good news I found a job that might be worth giving a shot, it’s not radio but it’s a job I think I have a shot at… just depends if I can get it!

Is this a dream?

The last few days… well if you know what I’ve been planning recently you’ll have known that it’s been bloody mental.

I kind of went quiet on the blog when things started getting quite busy with he planning for the big podcast. Yesterday the big podcast finished, and it’s been a time.

It started Friday morning when we were forced to pull up the microphone because the computer crashed and since then the faders stayed up for 30 hours. I don’t recall much of it offthe top of my head, but theres key moments like the Guitar hero near the start, overnight playing cards against humanity, hitting the wall at 7am, looking at Zoe’s mouth for long periods of time while trying to figure out what she’s saying and just generally trying to ensure there was no dead air. You can listen to the results when I’ve finished making a playlist (which should be within an hour of this post going out) on http://soundgorillas.co.uk/thebigpodcast or download it via iTunes and you can still donate by clicking on the same link and going to Donate Now.

When I got home, things were getting bad. I’d had time to shut up and sit down properly and started falling asleep on the bus. I hot home where I recived big hugs from Aphre and a gamon sandwich and a can of vimto. I went to bed about 4.30pm. I got up at 11pm to get a drink where I drank 2 pints of vimto squash and half a bottle of orange juice, then went back to sleep.

I woke up next at 7.30 when Finn woke up. Today doesn’t feel real. I’m half expecting to wake up to find it was a dream and im currently sleeping. I had a huge emotional thing this morning and not sure why, it just all feels like this isn’t real and everything is disconnected in a “this is not my beautiful house, this is not my beautiful wife (fiance) how did i get here” type situation knowing this is actually my life. Have i died and I’m living is some sort of construct? I know it’s probably because im tired though so I’m just holding it out till tomorrow morning. It’s very weird, a little scary and just over-all confusing.

I’ve just had dinner, but now its time to have an ice cream and sort out what’s going on wih audioboom